Haxan: Witchcraft Through the Ages (Dir. Benjamin Christensen, Swe., 1922) ( Screening format – not known, 105mins) A fictionalized documentary with dramatic reconstructions showing the evolution of witchcraft, from its pagan roots to its confusion with hysteria in modern

(1922) Europe. Based partly on Christensen’s study of the  Malleus Maleficarum, a 15th-century German guide for inquisitors, Häxan is a study of how superstition and the misunderstanding of diseases and mental illness could lead to the hysteria of the witch hunts.  Although it won acclaim in Denmark and Sweden when first released, Haxan was heavily censored or banned outright in many countries.  But it is now considered to be

Christensen’s finest work, a witches’ brew of the scary, the grotesque, and the darkly humorous. Find out more at thedevilsmanor.blogspot.co.uk .  Presented as part of Birmingham’s Flatpack Festival.   Reece Shearsmith (The League of Gentlemen, High Rise, A Field in England), will be narrating a live translation of the Swedish inter-titles and renowned musician Stephen Horne will be providing live musical accompaniment. Town Hall, Birmingham. Link 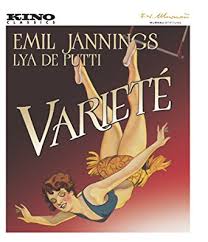 Variety (Dir. E A Dupont, Ger, 1925) (Screening format – not known, 94mins) Actor Emil Jannings was one of the most esteemed actors of this time, working with directors such as F.W. Murnau and Josef von Sternberg, before moving to America to become the first winner of the Oscar for Best Actor, and ending his career in disgrace after appearing in Nazi propaganda films. In this seamy melodrama, he plays Boss Huller, a former trapeze artist who abandons his family for a younger colleague 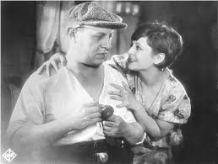 (Lya De Putti). When the couple becomes a professional trio, a love  triangle is formed, and tragedy ensues. The film features some of the most inventive camerawork of the period, its ‘unchained’ approach making for breathtaking performance scenes.Find out more at moviessilently.com .  Presented as part of the Flatpack Festival.  With a live performance of trapeze, ground based acrobatics, acrobalance and physical theatre, whilst multi-instrumentalist Stephen Horne and percussionist Martin Pyne will provide the live soundtrack. RoguePlay Theatre, Minerva Works, Birmingham Link

mins ) In The Lodger, a serial killer known as “The Avenger” is on the loose in London, murdering blonde women. A mysterious man (Ivor Novello)  arrives at the house of Mr. and Mrs. Bunting looking for a room to rent. The Bunting’s daughter (June Tripp)  is a blonde model and is seeing one of the detectives (Malcolm Keen) assigned to the case. The detective becomes jealous of the lodger and begins to suspect he may be the avenger.  Based on a best-selling novel by Marie Belloc Lowndes, first published in 1913, loosely based on the Jack the Ripper murders,  The Lodger was Hitchcock’s first thriller, and his first critical and commercial success. Made shortly after his return from Germany, the film betrays the influence of the German expressionist tradition established in such films as The Cabinet of Dr. Caligari (1919) and Nosferatu (1922). Find out more at silentfilm.org. Presented as part of the Flatpack Festival.   With live musical accompaniment by the Meg Morley Trio.  The Royal Birmingham Conservatoire, Birmingham  Link

Adventures of Prince Achmed (Dir. Lotte Reiniger , Ger, 1926) (Screening format – not known, 65mins) The first feature-length animation in film history, masterminded by Lotte Reiniger and hand-tinted frame by frame. Based on ‘The Arabian Nights’, the film tells the epic tale of Prince Achmed, who is tricked into mounting a magical flying horse by a wicked sorcerer.

The horse carries Achmed off on a series of adventures, over the course of which he joins forces with young Aladdin, battles ogres and monsters and romances the beautiful Princess Peri Banu.Find out more at wikipedia.org . Presented as part of the Flatpack Festival.  The screening will be accompanied by a brand new score collaboratively written and performed by a group of composition students at Birmingham Conservatoire.  The Engine Room, Birmingham Link