We were back at the Cinema Museum tonight to see the latest Kennington Bioscope presentation, a Lon Chaney crime drama Ace of Hearts (1921).  But prior to that, there was an eclectic programme of shorts to savour.    First up was H2O (1929), a poetic evocation of water and the earliest film produced by photographer and pioneer documentary film maker Ralph Steiner.  Beginning with conventional shots of water rushing, pouring from a pipe, spouting, falling, moving, and churning it gradually

moves on to focus on reflections and the increasingly abstract patterns they produce, barely recognisable as water and more reminiscent of animation.  In fact, I was reminded somewhat of a Norman McLaren/National Film Board of Canada animation Begone Dull Care (1949) which consisted of abstract patterns drawn, painted and even scratched on film negative. And if you thought that 12 minutes spent watching reflective patterns in water might be a little boring, then think again as the images Steiner produced had a breathtaking beauty and an air of peacefulness admirably complemented by the piano accompaniment of John Sweeney. (H20 is available on DVD in a 7 disc collection Unseen Cinema: Early American Avant-Garde Film 1894-1941 (Disc 3) from Image Entertainment and can also be viewed on You Tube)

Next up was an Italian curiosity, Lea and the Ball of Wool (1913), starring prolific Italian (albeit German born) comedic actress Lea Giunchi (image, right). In the film, Lea systematically destroys her parent’s home while looking for a ball of wool which

has inexplicably got caught up on the back of her dress.  This was one of at least 34 Lea comedies made by Giunchi in a 136 film career which included a number of other long running comedy series that proved popular all over Europe and the United States.  As Lea and the Ball of Wool amply demonstrates, Giunchi had a talent for physical comedy but she also appeared in serious drama.  In particular, she starred in the Guazzoni directed Italian epic Quo Vadis (1913).  Giunchi had retired from the screen by 1920 and emigrated to Brazil after the Second World War after which all trace of her is lost.  (This film does not appear to be available in any format)

There then followed a charming fantasy film, Moonland (1926) about a small boy and his dog who go on a mystical visit to the man in the moon.  Directed by William A O’Connor and starring seven year old Mickey McBann (who was already a veteran actor with 16 films behind him) the film employs a range of cinematic special effects, Melies style, to tell its story.  (Moonland is available on DVD in a 7 disc collection Unseen Cinema: Early American Avant-Garde Film 1894-1941 (Disc 4) from Image Entertainment and can also be viewed on You Tube)

This was followed by a Charley Chase comedy, Bromo and Juliet (1926), with piano accompaniment by Meg Morley.  When a club decides to put on a show that includes the balcony scene from Romeo and Juliet, Charley’s fiancee Madge informs Charley she will only marry him if he plays Romeo. Madge’s father also agrees to be in the show but problems arise when both become intoxicated and are pursued by a taxi driver they owe money to and a policeman with them turning the pretentious show

into a comedy triumph. Whilst perhaps not amongst Chase’s best pictures Bromo and Juliet has a number of very amusing moments, for example when Chase pads out his tights with sponges or when the wet sponges subsequently leak through the top deck of a bus on to passengers below.  The taxi driver was played by Oliver Hardy in one of his last individual roles before partnering up with Stan Laurel.  (Bromo and Juliet is widely available on DVD/BluRay and can be viewed on You Tube)

Finally, we had a short clip from Ernst Lubitsch film So This Is Paris (1926) featuring a stupendous dance scene set in a charleston club, as visually  impressive as anything Busby Berkeley would go on to do. (So This Is Paris does not appear currently to be available on Blu-Ray or DVD although the dance scene is view-able on You Tube.)

And then it was time for the main feature, Ace of Hearts (1921), the second of five films (of which three are considered lost) Chaney made for Goldwyn Pictures in between contracts at Universal and MGM.  The story was based on a pulp novel The Purple Mask, by Gouverneur Morris.  The film reunited Chaney with director Wallace Worsley with whom he had worked previously on The Penalty (1920) which was also based on a Gouverneur Morris novel.

In Ace of Hearts, a secret vigilante society’s members  meet to decide the fate of a wealthy businessman  known as ‘The Man Who Has Lived Too Long’ and vote to dispatch him with a bomb concealed in a cigar case. Society members Forrest (John Bowers) and Farallone (Lon Chaney) are both in love with the sole woman in the group, Lilith (Leatrice Joy).  Forrest even shows her a marriage certificate he carries next to his heart in case she agrees to marry him.  But Lilith rejects them both saying that she is devoted only to the society’s  ’cause’ . Lilith deals playing cards (suddenly revealing the skills of a Las Vegas croupier! Image, below right), whoever receives the ace of hearts is to carry out the assassination. When Forrest is chosen, he is ecstatic while Farallone is distraught,  becoming even more so when Lilith suddenly offers to marry Forrest that night if it will bring him more courage to fulfill his mission. 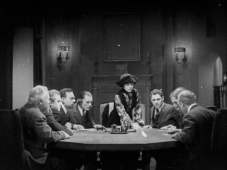 Forrest and Lilith return – now married – to his apartment while the grief-stricken Farallone spends the night in the rain outside. But a night of passion has clearly cooled Lilith’s ardour for ‘the cause’ and she now professes her love for Forrest and begs him not to risk death by going through with his mission.  He, however, replies that he is honour-bound and departs with the bomb for the restaurant where he will kill ‘The Man Who Has Lived Too Long’ while he eats breakfast.

A distraught Lilith seeks out Farallone who, while refusing to stop Forrest, agrees to help the couple escape the society’s punishment if Forrest fails in his task, but extracts a promise of marriage from Lilith if Forrest is killed (image, below ). Meanwhile, Forrest himself decides to abort his mission after he spies a young eloping couple seated next to the wealthy businessman’s table who would also be killed if the bomb went off.  When he returns to the society with the bomb, the group’s leader Morgridge (Hardee Kirkland) sends the couple away to await Forrest’s execution. Farallone begs

the others to reconsider, but they are unmoved. As the cards are dealt once more, it is Farallone who gets the ace of hearts. Laughing, he carries out his part of the bargain with Lilith by secretly setting off the bomb within the society, killing all present.  A fleeing Forrest and Lilith read in the papers of the society’s destruction and depart hand in hand down the road.

Any Chaney film in which he is not buried under kilos of make-up and prosthetics or has the use of all four limbs is always going to be of interest but it has to be said that Ace of Hearts is not one of his best outings.  The pace of the film is ponderously slow, excruciatingly so at times, particularly in the card dealing scenes and never ending coded door knocking episodes.  Much of the ‘action’ takes place in a somewhat dreary secret society committee room, atmospherically lit to match the mood and just about the only time anyone cracks so much as a smile is Chaney himself just before the bomb goes off.  Lilith and Forrest’s overnight conversion from hard-nosed revolutionaries to lovelorn softies strains credibility somewhat. Chaney’s acting is

heavy handed and overly theatrical while his hair-style is, well…think Max Wall and you have an idea (Image, right).

And Sam Goldwyn was probably wise in rejecting the original ending of the film, which saw Lilith and Forrest unsure about the demise of the society and living in hiding in the mountains with their baby, but convinced that Farralone has somehow succeeded in preventing their death; however, one day Forrest finds the Ace of Hearts stuck in the bark of a tree. Rushing back to the cabin in a panic, he sees Morgridge approaching; one of his arms is missing, and he walks slowly with a cane. Morgridge tells Forrest not to fear, that Farralone’s sacrifice to save the couple taught him that love is a greater force to improve the world than destruction.  No, that’s definitely a re-shoot!!

But the film is not without its plus points.  There was some genuine tension in the ‘will he – won’t he’ go through with the bombing question.  I also liked the scenes of Chaney outside the apartment in the pouring rain (in a sort of studio hosepipe and wind machine sort of way) and the stray dog that woke him the next morning was the cutest thing out.  And there were a couple of instances which amusingly demonstrated how both technology and attitudes have moved on when, in the absence of radio or TV news, the conspirators have to await the issue of a newspaper ‘extra’ to see if the bombing has been successful or when the eloping couple cautiously survey the breakfast room to make sure no one sees them…holding hands!

Chaney of course went on to much bigger and better things, renowned for his characterizations of tortured, often grotesque and afflicted characters, and his groundbreaking artistry with makeup such as The Hunchback of Notre Dame (1923), Phantom of the Opera (1925) and The Unknown (1927).  Leatrice Joy

had been popular in comedy shorts since 1916 before moving on successfully to dramatic starring roles by the end of the decade.  In the 1920s she joined Cecil B DeMille’s company, appearing in many of his films.  She was briefly married to John Gilbert but failed to make the transition to talkies, apparently as a result of her heavy southern accent (she was born in New Orleans).  Despite being a successful silent star, John Bowers also failed to make the transition to talkies and apparently committed suicide by drowning in 1936.  His life and particularly his death is variously identified as inspiration for the character Norman Maine in A Star is Born (1937/1954). Director Wallace Worsley would go on to direct Chaney again in The Hunchback of Notre Dame (1923) before retiring from film work in 1928.  (Ace of Hearts is available on DVD and there is a good quality version on You Tube, albeit with a somewhat annoying organ soundtrack!)

So yet again, the Kennington Bioscope produced an interesting and entertaining evening.  While Ace of Hearts may have been a bit more of a miss than a hit, it was still watchable and the screening benefited greatly from Lilian Henley’s talents on the piano.  The accompanying short films were fascinating and even below par Charly Chase is worth watching.  Meanwhile, I am off now to try and track down the full length version of So This Is Paris (1926)!