Entering the Classical World through Silent Cinema A live screening of four rarely seen but remarkable films about ancient Greece and Rome. The first two document the ruins of the classical world as they appeared to travellers in the early twentieth century. Pompeii and Vesuvius (1906) juxtaposes disturbingly the damage caused by the modern eruption of Vesuvius with shots of Pompeii, the ancient city of the dead. An Excursion in Ancient Greece (1913) takes its elegant sightseers up the Corinthian canal to view the monumental

ruins on the Acropolis.  Beautifully shot on location in southern France, Slave of Phydias (1916/17) tells the story of the tragic love a slave-girl stirs in the sculptor for whom she models. The Tragic End of the Emperor Caligula (1917) reaches a turbulent climax when a terrified Christian must dance before the emperor to save her fellow believers from death. Through their enticing use of gesture and look, exotic sets and extravagant costumes, music and movement, these films offer their wartime spectators the opportunity to enter into another world, and to experience the classical past as if they were there. The screening of Caligula will be the UK premiere of a beautifully restored print from Italy. The other prints were obtained especially for this occasion from archives in Austria, the USA, and the UK. With live musical accompaniment by Stephen Horne.  Bloomsbury Theatre, London  Link 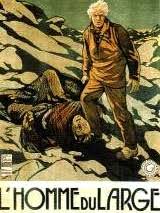 shockingly dissolute son, who’s addicted to the pleasures not of the open sea, but of an urban low-life bar. Watch out for a young Charles Boyer and a lesbian kiss. Highly stylised, with its vibrant tints and decorated titles, this is high melodrama with a 1920s twist.  Find out more at www.acinemahistory.com.  With live musical accompaniment.  BFI Southbank, London Link

Glimpses of Galway (Dir. Various, Irl, 1920+) (Screening format – not known, 70mins) The Irish Film Institute presents a wonderful new programme of archival films made in and about Galway. These precious snapshots of Irish life range from the silent movie era in the 1920’s, right through to the 1970’s. The programme includes compelling and rarely-seen amateur and professional material covering a broad range of people, places and activities.  Presented as part of the 31st Galway Film Fleadh.  Silent films in the programme will be accompanied by Aran Island fiddler Deirdre Ní Chonghaile.  Town Hall Theatre, Galway.  Link 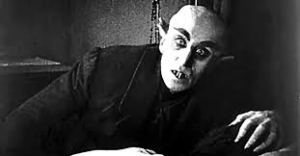 Nosferatu (Dir. F W Murnau, 1922) (Screening format – not known, 96mins) A German Expressionist horror masterpiece starring Max Shreck as the vampire Count Orlok.  The film was an un-authorised adaption of Bram Stoker’s ‘Dracula’ with names and other details changed because the studio could not obtain the rights to the novel.  Stoker’s heirs sued over the adaption and a court ruling ordered that all copies of the film be destroyed.  However, a few prints survived and the film came to be regarded as an inspirational masterwork of the cinema. In the film, Count Orlok travels across Europe leaving a trail of death in his wake.  Brilliantly eerie, with imaginative touches which later adaptions never achieved.  Find out more at wikipedia.org Presented by the Deal Music and Arts Festival.  With live musical accompaniment by Minima.  Astor Community Theatre, Deal Link

One Week (Dir. Buster Keaton/Eddie Cline, 1920) + selected shorts (Screening format – not known, 19 mins)  One Week sees Buster and his new bride struggling with a pre-fabricated home unaware that his bride’s former suitor has renumbered all of the boxes.  Find out more at wikipedia.org .  With live musical accompaniment by Wurlitza. Port Elliot Festival, St German’s, Cornwall  Link

eyes for Nell.  Consumed by jealousy, Burt plots to discredit Bill with a plan that results in a daring chase through London’s underground and across rooftops of the city.  Although Underground was only Asquith‘s second film  he handles the melodramatic story with confidence and great sophistication.  Underground is a rare study of 1920s working-class London, and offers a fascinating and historically interesting glimpse of its public transport system.  Find out more at screenonline.org.uk  Presented by the Lucky Dog Picturehouse.  With live piano accompaniment by Tom Marlow.  Brunel Museum, Rotherhithe Link

A Lost World Made New: Victorian Cinema in VR  The bold experimenters at the dawn of the moving-picture revolution were quick to explore the possibilities of the medium and capture the Victorian world on film. In a unique partnership, the BFI National Film Archive has collaborated with Bristol-based design and graphics company BDH to represent Victorian filmmakers’ early experiments with the medium through the new form of VR. The process of digitising and scanning the images brings the viewer into a new exciting relationship with the films and indeed the past.   BFI silent film curator Bryony Dixon is joined by BDH’s John Durrant for a show and tell about the context of the original works, the motivation for wanting to revisit these works in VR and the process of digitisation.   Presented as part of the Cinema Rediscovered Festival.  Watershed Cinema, Bristol  Link 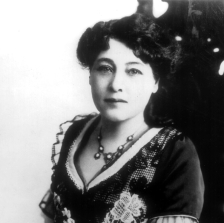 Alice Guy-Blache Evening  (Dir. Alice Guy-Blache, Fr, various) One of the first filmmakers to direct a narrative fiction film, and the first known woman filmmaker, Alice Guy-Blaché had a prolific career that spanned more than 25 years. Starting as a secretary for Gaumont, she eventually became head of film production there until 1907; going on to create the highly successful Solax production company in 1910. By 1912, her rate of film production equaled that of D.W. Griffith, and her films were equally as popular. She wrote and produced more than 700 films throughout her career, making films with Gaumont’s early synchronised sound system, Chronophone, experimenting with special effects, tinting and toning colour processes, and making the first film known to have an all African-American cast, A Fool and His Money (1912).  She was awarded France’s Legion d’honneur, and became recognised by film historians including Jean Mitry and Charles Ford. She spent her later life tirelessly trying to recover her lost films, and has been the subject of several writings and a documentary. This event includes a selection of her inspiring works, including Matrimony’s Speed Limit (1913), Burstup Holmes Murder Case (1913) and Ocean Waif (1916).  Presented as part of the Cinema Rediscovered Festival.  With an introduction by noted silent film writer Pamela Hutchinson and with live piano accompaniment from Meg Morley.  Watershed Cinema, Bristol Link 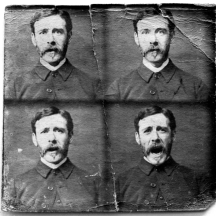 Victorian Film Inventor: Friese-Green  How on earth did Willie Green, a working-class kid from Bristol, become William Friese-Greene, the first person to present a movie camera to the world? And how is it possible that he died an unknown pauper in 1921, was considered important enough to have an all-star movie made about him thirty years later – The Magic Box, but since then has been completely ignored by film historians?  Film director Peter Domankiewicz became fascinated by the Friese-Greene story whilst living in Bristol in the 1990s and has undertaken the most substantial research to date, to untangle the real person from this mass of contradictions. In this talk, he will trace how Friese-Green’s photographic skill and self-confidence helped him found a successful chain of studios and led to collaborating with John Rudge in Bath to bring moving photographs to the magic lantern, before making the leap to the world of the learned societies of London and the possibilities of capturing life on a strip of film.  Always looking to the future, he also championed the role of women within photography. He would go on to create some of the earliest colour film systems, leading to his son Claude capturing 1920s Britain in colour in “The Open Road”.   Presented as part of the Cinema Rediscovered Festival.   Watershed Cinema, Bristol  Link

Robert Who? Rediscovering Britain’s Forgotten Film Pioneer If you’ve never heard of Robert Paul, don’t worry. Surprisingly few people, even among film fanatics, know much about him. Yet more than anyone, he was responsible for launching cinema in Britain, back in the 1890s. Not just ‘moving pictures’ – many pioneers contributed to their invention, including Bristol’s very own William Friese-Greene.  But Paul didn’t only make and sell the first equipment and films in Britain, he also supplied half the world, and built the first studio in 1898. He realised film had to move on from just showing things moving. ‘The capacity of animated pictures for producing Breathless Sensation, Laughter and Tears has hardly been realised’, his advertisement claimed for what the studio had been producing that Autumn, and he went on to create much of what we still take for granted in movies. So why isn’t he known alongside names like Lumière and Edison?    Presented as part of the Cinema Rediscovered Festival.  Renowned British film scholar Professor Ian Christie presents an illustrated talk unpacking the hidden history of R W Paul’s neglect, arguing that his pioneering example should be recognised today to inspire us in this age of digital media. To celebrate Paul’s 150th birthday, Christie has also produced a graphic novel, Time Traveler: Robert Paul and the Invention of Cinema.  Watershed Cinema, Bristol  Link