Kennington Bioscope at the Cinema Museum

And the Kennington Bioscope comes up trumps again!  Just as BFI Southbank kicks off its two month retrospective on Weimar Cinema the KenBio manages to programme in a quality film from this era not included in the BFI’s own season. The film in question is director Hanns Schwarz’s Hungarian Rhapsody (1928) a lilting romantic melodrama.  But first up there is a programme of intriguing shorts.

These kicked off with Around Versailles, a hand coloured travelogue from Pathe Freres dating back to 1911 showing the gardens and fountains of the Palace at Versailles. Next up was another Pathe Freres film, this time a comedy, Little Moritz Marries Rosalie (1911) directed by Henri 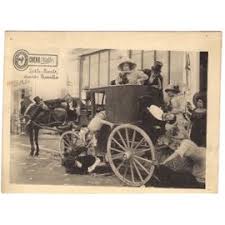 Gambard.  Starring German music-hall comedian Maurice Schwartz, this is one of at least 27 Little Moritz shorts produced between 1910 and 1912.  In the film, Little Moritz oversleeps and is late attending his wedding to Rosalie (Sarah Duhamel).  The married couple then fall from their carriage into a drain, the rest of the wedding party try to track them down and finally all escape by knocking a hole through a police station wall. Made in a cinematically somewhat crude, Keystone-like knockabout style the only notable moment came at the film’s finale where the clearly unflappable Rosalie is totally unperturbed by the very large and very live rat perched on her shoulder while locked in the police cell.

Of more interest was Spring (1909) directed by Louis Feuillade a hugely prolific (630+ films between 1906 and 1924) early French director better known for his visionary serials such as Fantomas (1913-14) and Les Vampires (1915-16).  Spring is a collection of images of nature featuring women and children dressed as fairies and dancing in celebration of the arrival of spring.  It is interesting in its early (and quite effective) use of double exposures, tinting and iris framed shots.  Lastly, and probably of most interest, was another colourised short from Pathe, Semiramis 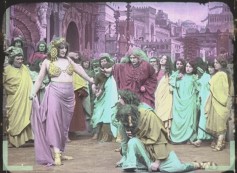 (1910).  Directed by Camille de Morlhon the film  depicts the life of Semiramis, wife of Babylonian King Nimus. Opening with Nimus’ first meeting with the headstrong Semiramis, it goes on to show their wedding quickly followed by her plotting the murder of her husband.  She then subdues the unruly Babalonians by her force of will, defeats their enemies and celebrates in the fabled hanging gardens.  The film ends with her eventual death, carried to heaven by doves, after which Babylon is destroyed by invading barbarians.  The film is particularly notable for the quality and scale of its hand colourisation. Semiramis is played by Stacia Napierkowska or, depending upon your source, Madeleine Roch or even Yvonne Mirval !

Little Moritz Marries Rosalie (1911) and Spring (1909) can be watched on-line but no sign of the other two being available.

Moving on to the main feature, Hungarian Rhapsody opens with aristocratic but impoverished junior Hussars officer Franz Graf (Willy Fritsch) bemoaning army rules that prevent him marrying unless he has a sizeable nest-egg.  Franz loves Marika (Dita Parlo), daughter of the  estate manager for the wealthy Baron Barsody but Dita’s father objects to his daughter seeing the prospect-less Franz. When Dita and Franz meet 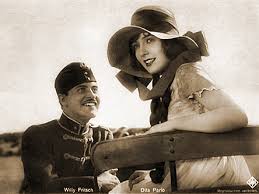 secretly one evening she suggests he give up his commission so they can marry and work together on the land.  When Franz objects, saying that his military career is the only thing that makes him a gentleman, Dita rejects him.

Meanwhile, Baron Barsody hosts a visiting general and his attractive wife Camilla (Lil Dagovar).  While her husband is away inspecting local military barracks Camilla flirts with a gypsy violinist but looses interest in him when she meets Franz.  The two are immediately attracted to each other and arrange to meet again later that evening.  Aggrieved at being passed over, the violinist tips off the general who hurries back expecting to catch his wife with another man.

Marika is stricken at the thought of Franz and Camilla together but as she sees the general returning she nevertheless races to warn Franz. When the general bursts in Camilla is alone but as he searches the apartment he instead finds Franz and Marika together.  When word reaches

Marika’s father that his daughter has been seen alone with Franz he is about to throw her out for bringing shame on the family.   Discarding his uniform and with it his army career Franz offers to marry Marika at which point he, Marika and her father are reconciled.  The film ends with Camilla chastising her husband over his suspicions regarding her fidelity while Franz and Marika are seen happily working the land.

When released in Germany in 1928, Hungarian Rhapsody was one of the most popular films of the year and its not difficult to see why.  Right from the opening scene as hundreds of workers cut wheat in the fields the film looks stunning.  The big ensemble scenes, such as the wild party in the officer’s mess or the peasant’s harvest 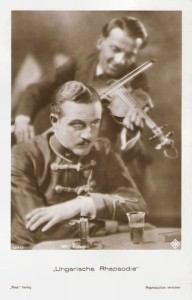 festival dance, are brilliantly staged with breathtakingly fluid camera movement.  Perhaps the film’s only weak spot is the somewhat unbelievable reconciliation between Franz, Marika and her father.  Could family dishonor be so easily erased.  But this is just a minor point for a hugely enjoyable film.

Then there are the performances from the leading players.  Dita Parlo (image below left, with Willy Fritsch) is excellent as the seemingly quiet and demure Marika.  But when Franz tells her of his unwillingness to give up his military life for her, then her eyes narrow, her nostrils flare and she seethes 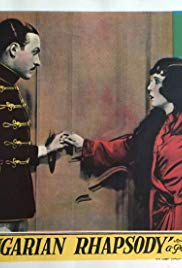 with quiet anger. Similarly, when she observes Franz’s nocturnal tryst with Camilla her face is a picture of almost overwhelming sadness.  Aged just twenty when the film was released, this was only her fourth acting roll and her first big hit.   Successfully navigating the transition to talkies, she again starred alongside Fritsch in the Melody of the Heart (1929) the first German sound film, also directed by Hanns Schwarz, before going back to making a final silent film, Julien Duvivier’s superb Au Bonheur des Dames (1930).  After a largely unsuccessful spell in Hollywood Parlo returned to Europe and settled in France where she appeared in two of the seminal films of the 1930s, Jean Vigo’s L’Atalanta (1934) and Jean Renoir’s La Grande Illusion (1937).  Her acting career pretty much ended when, because of her nationality, she was forcibly returned to Germany at the beginning of World War Two.  Returning to France after the war she had a couple of minor parts before one final starring role in the Leonard Keigel directed version of Pushkin’s The Queen of Spades (1965). 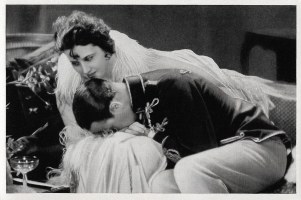 But good as Parlo is, it is Lil Dagover (image right, with Willy Fritsch) who is the real star of the film as Camilla, the bored wife of the general (played by the somewhat unfortunately named Eric Kaiser-Titz!).  She just exudes a sensual charm and knows exactly how to use it, either as she flirts with the violinist on her balcony or nestles up to Franz on the chaise lounge. And the scene where she chastises her husband for unjustly (ahem!) suspecting her of infidelity is just priceless.  Aged 41 when Hungarian Rhapsody was released, Dagover was already a seasoned veteran of the German cinema, making her first film appearance in 1913.  She had leading roles in classics such as Robert Weine’s The Cabinet of Dr Caligari (1920), in Fritz Lang’s Der Mude Tod (1921) and Dr Mabuse; The Gambler (1922) and in F W Murnau’s  The Phantom (1922) and Tartuffe (1925).  She too made a seamless transition to talkies and continued her largely German focused acting career until her final film role in 1979.  Dagover died in 1980 aged 92. 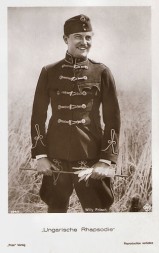 Perhaps the weakest link amongst the main players was Willy Fritsch (image, left) as Franz.  Its not so much his portrayal, more the character of Franz himself, the somewhat slimy and womanising army officer, switching his affections from Marika to Camilla and back to Marika. But Fritsch looked born to play such a part and did so in innumerable romantic dramas, making him one of the most popular stars of German cinema, among the female audience at least.  However, he could also turn his hand to thrillers, such as Lang’s Spies (1928) as well as knockabout comedy in the hilarious but little known Swedish comedy Sister of Six (1926) alongside Britain’s own Betty Balfour.  He continued making films in Germany until his final appearance in 1964 (including another film entitled Hungarian Rhapsody (1954) but this time a biopic of Franz Liszt).  He died in 1973.

Austrian born director Hanns Schwarz started at the UFA studios in 1924, becoming one of their most reliable assets.  Apart from Hungarian Rhapsody, probably his best known silent is the romantic tragedy The Wonderful Lies of Nina Petrovna (1929), starring Brigitte Helm.  After directing Germany’s first sound film in 1929 he went on to direct a string of popular musical romances but, being a Jew, he left Germany when the Nazis came to power.  He made films in France and England before moving on to Hollywood where he did some script work.  Returning to Britain he directed one last minor film, The Return of the Scarlet Pimpernel (1937) starring a youthful James Mason, before his death in 1945.

But as good as Hungarian Rhapsody was, the film was hugely enhanced by a brilliant live performance from John Sweeney on the piano.  In particular, his accompaniment of the dance scenes in the officer’s mess and at the harvest festival celebrations was an absolute tour de force and as the raucous applause at the film’s finale indicated, it was greatly appreciated by the whole audience.

Hungarian Rhapsody is available on disc from Grapevine Video in the US but this may be a shorter US release edit  and taken from a poorer 16mm print compared to the BFI’s 35mm print screened tonight.  You have been warned!  Only short clips appear to be available on-line.  .

So, anther hit for the Kennington Bioscope.  But there is much more from them to come.  Next up is F W Murnau’s wonderful but rarely screened City Girl (1930), a film with some interesting parallels to tonight’s Hungarian Rhapsody ( a landscape of sweeping wheat fields, a somewhat mis-matched couple and parental dislike of a potential suitor) being shown on 29 May.  Then in early June it is the KenBio’s Silent Film Weekend, always a mecca for the silent film aficionado.