This had all the potential to be a great evening.  A venue not previously visited, an episode from one of the best French silent film serials and live musical accompaniment from a group about which we had heard positive things. Sadly it didn’t quite turn out like that.  The venue was the LSO St Lukes, an 18th Century Anglican church stunningly converted into a live music venue.  The event was a screening of part of the Fantomas film serial, a highly inventive and hugely enjoyable crime drama. The accompaniment was from Icelandic neo-classical quartet Amiina who have released several well received albums of their own as well as supporting Icelandic group Sigur Ros.

But the problem started even before even before the music began, when the group announced that they would be screening the film without English translations of the French inter-titles.  Why!! Why would you do that? Gaumont Studios’ 2016 4k restoration of this film, including English subtitling, is widely available so

presumably the decision not to switch on the subtitling was deliberate. This was all treated by the group as something of a joke, along the lines of ’ho hum, we’re this zany band of Icelandic musicians and wouldn’t this be a wacky thing to do’. Well actually no, its not.  In fact it was about as artistically crass a decision as the recent screening of Salome (1923) at the Barbican where the accompanist decided to screen the film entirely without inter-titles.

Effectively what we have is one group of artists denigrating the work of another. Because instead of the musicians accompanying the film, they are placing their work above it, with the film they are supposed to be complementing becoming little more than a collection of images used as backdrop

to their music. In an artistic sense, they are effectively putting the cart before the horse.

This was doubly frustrating this evening because Amiina’s music had huge potential to complement and benefit the film.  The compositions were superb and appeared to fit well with both the on-screen events and tempo.  Similarly the musicianship could not be faulted.  But instead of sitting back and enjoying the music and visuals working in harmony, for those not familiar with the film this was just 65 minutes of staring at the screen, frustratedly wondering what the hell the story was all about!! For 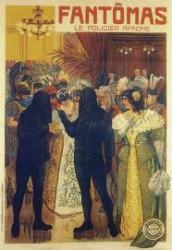 silent film enthusiasts in the audience this was, in effect, a wasted evening, as were by association the efforts of the musicians.  Which was a real pity!

Additionally, whilst it may generally be expected that when attending a foreign language film in this country subtitling would come as standard, where this is not the case then it is surely incumbent upon the organisers to make sure that this is made clear to a potential audience before they purchase tickets.

So, apologies if this does not take the form of a proper silentfilmcalendar.org review.  But this wasn’t really a proper silent film screening!  If you want to know more about Fantomas then you could try here or here and if you’d like to but a copy of your own (with English subtitles!) then try here