How many months begin with the pleasing prospect of almost forty silent films being screened at a single venue?  So it was at the beginning of May at BFI Southbank, with the bulk of this bumper crop of silents arising from the first

half of their extensive two month Weimar Cinema season.  And at the gala launch event of this very welcome season we were to be treated to a rare screening of Reinhold Schünzel’s little known but highly rated comedy Heaven on Earth (Der Himmel auf Erden, 1927), with live musical accompaniment from composer and musician Helen Noir. What was there not to like?  Well, how wrong could we be!! 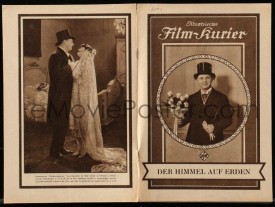 Heaven on Earth tells the story of local politician Traugott Bellmann ( Reinhold Schunzel) who is facing a momentous day.  Not only is he due to marry his fiancé Juliette (Charlotte Ander) but he is also to make his maiden legislative speech.  Using his speech to condemn society’s overall moral decline he also calls for the closure of the notorious nightclub ‘Heaven on Earth’.  Unfortunately his prospective father-in-law is the champagne supplier to the nightclub and is horrified at the potential loss of his best customer so marriage to his daughter looks to be in jeopardy. For his moralistic stand Bellmann is appointed president of the Moral Decency League and manages to get his marriage back on track.  However, he then learns that his brother has died and left him not only half a million Marks but also the very same Heaven on Earth nightclub.  But if he is not at 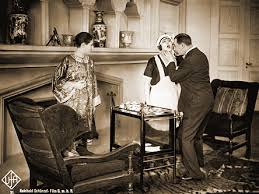 the nightclub at ten o’clock that evening he will loose the entire inheritance.  As the wedding celebrations drag on Bellman gets increasingly concerned that he won’t make it, eventually having to abandon his new wife in the wedding suite,

At the club, he not only establishes his ownership but also has a great evening of dancing and drinking. The next day he struggles to keep his ownership of the club a secret from his wife but that evening, back at the club he is shocked to see his father-in-law there as a customer.  Trying to conceal his own identity by dressing as a woman, Bellmann is then pursued by his overly amorous father-in-law, 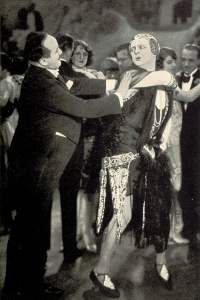 unaware of the true identity of the subject of his affection.  To add to Bellmann’s woes, Juliette also turns up at the club seeking to discover the truth about her new husband. To save his wife from the attentions of some of the club’s more amorous clientèle Bellmann is forced to reveal his identity but is then reconciled with his wife and the two head off to the dance floor together.

So, what were we to make of this well regarded example of Weimar comedy.  Well in all honesty, it was difficult to tell, given that the film was so totally overwhelmed by the musical accompaniment. Surely a 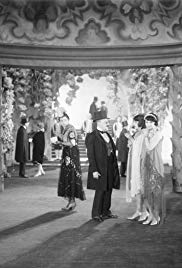 film such as this, a farce laden comedy of manners, deserved accompaniment with a certain lightness of touch.  Instead, it got not so much a sledge-hammer as a wrecking ball.  Frequently monotonous, at times atonal and often cacophonous, the accompaniment distracted from the film to such a degree that it was difficult to focus upon the plot, with the music rarely bearing any relation to on-scene activity or changes of pace. Instead of the music accompanying the film, the film was instead demoted to being little more than a visual backdrop to the music. Rather than enhancing the film, this was a disappointing case of the accompaniment simply bludgeoning the film to death.

distraction of the accompaniment.  Indeed there were moments of pure comic delight, not least the female dance troop disguised as English boarding school girls, the increasingly decrepit butler, the trained monkey and Schunzel’s appearance in drag.   As well as starring in Heaven on Earth, Schunzel (image, right) was also the film’s co-writer, producer and artistic supervisor (and visually it is stunning).  In some sources he is also credited as co-director. Although this film amply highlights his comedic talents, Schunzel was also a very creditable dramatic actor, having played for example Conrad Veidt’s blackmailer in Different From The Others (1919) as well as co-starring in Lubitsch’s Madame Dubarry (1919) alongside Pola Negri and he would go on to star in Pabst’s early musical The Threepenny Opera (1931). But his cross dressing role in Heaven on Earth would be a pre-cursor for his best known film as director, the gender challenging Victor and Victoria (1933).

Despite tonight’s disappointing musical accompaniment, Heaven on Earth is certainly a film worth seeing.  In fact, it is being screened again on May 12 at BFI during the current Weimar season, and would certainly be worth seeing with a more sympathetic accompaniment.

There is no sign of Heaven on Earth being available on disc or on-line.