Kennington Bioscope at the Cinema Museum

Having had to forego the KenBio’s February screening of Chicago (1927) in favour of catching the Asta Nielsen rarity Towards The Light (1919)  at the BFI, it was great to be back at The Cinema Museum for a double bill of rarities starring Clara Bow and not one but two Evelyn Brents.

First up was The Primrose Path (1925) in which…. Bruce Armstrong (Wallace MacDonald) “is recklessly squandering his days along the path of folly — The Primrose Path “.  Armstrong is racked with guilt that his drinking caused an accident in which his younger brother Jimmy (Pat Moore) was left crippled.  But clearly not guilty enough to stop him drinking.  At one of his regular drinking haunts Armstrong looses at cards to club owner Tom Canfield (Stuart Holmes) and his ‘heavy’, Big Joe Snead (Tom Santschi).  Armstrong writes out yet another dud cheque but Canfield offers to cancel all of Armstrong’s debts in return for his help in collecting some smuggled

diamonds from Dude Talbot (Templar Saxe).  Their conversation is overheard by the club’s star showgirl, Marilyn Merrill (Clara Bow), who is also Armstrong’s girlfriend.  She attempts  to dissuade him, but is prevented from doing so by Canfield who threatens to end her career.

In an argument over the smuggled diamonds, Snead accidentally kills Canfield.  Although Marilyn suspects it may have been Armstrong who killed him she still helps him evade the police.  Meanwhile, Talbot has reacquired the diamonds and told Snead that it is Armstrong who now has them.  When Snead accosts Armstrong at his house a fight ensues.  Just as Snead is about to kill Armstrong, he shoots him dead.  Armstrong is arrested and charged with murder.  At the trial, unable to face the prospect of his little brother Jimmy being forced to swear under oath that her saw his brother kill Snead (for which he faces the electric chair) Armstrong changes his plea to guilty.  But at the last moment, Talbot returns, points 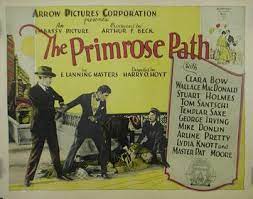 out that Snead was a ‘baddun’  so Armstrong could only have been acting in self defense.  Armstrong is released and he, Jimmy, their ailing mother and Marilyn are all happily reunited.

I have to be truthful here and say that The Primrose Path is just about the largest helping of cloying sentimentality it’s possible to squeeze into a 52 minute running time.   The film has it all, Armstrong’s ailing and grieving mother, crippled little Jimmy looking for all the world like one of those old fashioned collecting boxes for disabled kids with a statue of a child in callipers on the top,  the hard-bitten showgirl with a heart of gold, all the angst and guilt imaginable and last but not least little Jimmy shaking off the leg irons to show he can finally walk again.  All one can say is thank heavens for Clara Bow and thankfully she’s almost incidental to the plot so she can hardly be held to blame.  As Michelle Facey (@best2vilmabanky) pointed out in her informative introduction, this was one of 16 films Clara made in barely 18 months so, for her, The Primrose Path must have been little more than a blur on the cinematic production line.  Director Harry O Hoyt and writer Leah Baird are far more culpable.  Hoyt had been directing for at least a decade before The Primrose Path but my only other experience of his work is, I think, The Lost World (1925), made in the same year but in complete contrast to this sickly sweet melodrama.  Baird started out as an actress working for Vitagraph in 1910 and by the end of the decade had become a considerable star, eventually racking up almost 200 acting credits by the time she retired in the late 1950s.  But by the 1920s she was

increasingly writing screenplays and had also started up her own production company. Find out more about her here.

While The Primrose Path may be one to forget, it was nevertheless enlivened by Clara Bow’s usual spirited presence, and represented another step on her climb to super-stardom.  Barely a year later (and another ten films!) she was hitting the big time with Mantrap (1926)

and Kid Boots (1927) and then immortality with It (1927, image left).   But as for The Primrose Path, in the words of a somewhat exaspirated reviewer on Letterboxed.com, ‘Oh Clara, the things I watch for you!’

Piano accompaniment for The Primrose Path came from Meg Morley who, despite the limitations of the film, pulled out all of the stops to give it some class

The Primrose Path is available on disc from several distributors but beware, a number appear to be of dubious quality (at least one looks to be mastered from a VHS videotape copy of a 16mm reduction print…you have been warned!).  A (just about) watchable version is available on You Tube if you enjoy suffering!

We were on much safer ground with our second film of the evening, with the lovely Evelyn Brent starring in Midnight Molly.  In fact, two Evelyn Brents for the price of one because…….Midnight Molly (Evelyn Brent) is a notorious thief who, while breaking into an art gallery, is almost caught by  Detective Daley (John Dillon)   But in making her escape she is knocked down by a car and taken, unconscious, to hospital.  Meanwhile, across town mayoral candidate John Warren (Bruce Gordon) is on the brink of splitting up from his wife Margaret (Evelyn Brent) over her affair with shady businessman George Calvin

(Leon Bary) who is also wanted by the police.

Down at city hall, crooked politicians are desperate to find any scandal regarding Warren in order to damage his election prospects.  When they hear rumours that Margaret has skipped town with Calvin they task  Daley with digging for dirt.  Back at the hospital, Molly is wrongly identified as Warren’s wife. When he visits her he realises that, despite their close resemblance, she is not in fact his wife.  However, he convinces Molly to play the part until after he has hopefully been elected.

Molly somewhat reluctantly agrees but quickly becomes a powerful election asset and there is a growing affection between the two.  Molly even saves Warren’s life at one point.   But when Margaret and Calvin get wind of  what’s afoot they see an opportunity to blackmail Warren.  Daley is also

convinced that Midnight Molly and Warren’s wife are one and the same and manages to get a fingerprint from Molly’s hideout with which he plans to compare with that of Warren’s wife and expose the truth.

But Molly gets wind of these schemes, disables Calvin and forces Margaret to re-take her place as Warren’s wife in order to fool Daley’s fingerprint plan.  When an escaped Calvin now bursts in, Daley recognises him as a wanted man.  Calvin and Margaret seek to escape, with Daley in pursuit, but their car crashes and they are both killed.  Molly and Warren are reunited and after winning the election ‘Mr and Mrs Warren’ quietly get (re)married.

While perhaps not Oscar material, Midnight Molly was a real joy to watch.  Much of this was due to the presence of Evelyn Brent (image right, publicity shot) who always added a touch of style and sophistication to any film she appeared in and was an excellent actor to boot. Once seen, who could forget her as gangster’s moll 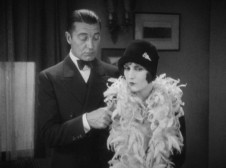 Feathers McCoy in seminal crime drama Underworld (1927, image left) or as revolutionary  Natacha Dabrova in Last Command (1928, image, below right) while in The Mating Call (1928) she acted co-star Renee Adoree right off the screen.

Although Midnight Molly was made several years earlier, before Brent achieved major star status, she was already a film veteran having made her film debut in 1914 with A Gentleman From Mississippi.  In 1920 she relocated to Britain, making a dozen films with directors including Maurice Elvey and Denison Clift.  Amongst these British films were a couple of particular oddities, Trapped By The Mormons (1922, image left) and Married To The Mormons (1922), both

anti-Mormon and leaning toward the white slave trade story-line.   All but two of Brent’s British films are lost (but thankfully not Trapped By The Mormons, if you are listening KenBio?).   Sadly her American films have fared no better.  In all, just 18  of Brent’s 68 silent film appearances survive.

However, she did go on to a moderately successful talkie career throughout the 1930s and 40s, albeit largely in B and C list films and gradually slipping down the credits.  Her last screen appearance was in an episode of Wagon Train in 1960 and she died in 1975, aged 85.

But getting back to Midnight Molly, the film was well directed by Lloyd Ingraham who kept the action moving along nicely which effectively distracted from the improbability of the plot.  There was some snappy inter-title dialogue, much of it focusing on Daley’s hat, although the description of the crooked politicians, “Down at city hall, they thought ‘Here Comes The Bribe’ was the national anthem” was a gem, while the scenes in which ‘both’ Evelyn Brents appeared together were cleverly done,

without reliance on camera tricks.  Amongst the rest of the cast, John Dillon was excellent as Daley, the plodding gumshoe, as was  John Gough,  playing his less than trustworthy sidekick.  Daley made his first film as far back as 1908.  By the time he appeared in D W Griffith’s pioneering gangster film The Musketeers of Pig Alley (1912) he had already made almost 60 films but Midnight Molly was the last credited of his almost 150 appearances.  Midnight Molly’s only acting let-down was Bruce Gordon as John Warren, who looked to have all the charm, charisma and acting ability as a plank of wood.  South African born Gordon began his film career in Britain in 1918.  A year later,  he directed and starred in The First Men In The Moon (1919), an early adaptation of the H G Wells story, but by 1920 he had relocated to America where he found fame co-starring with Ruth Roland in a number of action and adventure serials including The Timber Queen (1922) and Ruth of the Range (1923).

Although this print of Midnight Molly, provided by the BFI National  Archive , lacked both opening and end credits and had clearly suffered some crude post-distribution editing this did not detract in any way from its enjoyment.

Improvised piano accompaniment for the film came from Costas Fotopoulos which nicely caught both the humour and the tension of the film.

Midnight Molly is not available either on disc or on-line.

And that was it for another fabulous evening at the Kennington Bioscope.  Screenings of The Primrose Path are a rarity with the UCLA Film and Television Archive long thought to hold the only surviving copy.  But not so! A copy also resides with The Cinema Museum, which was what we watched tonight.  And with remarkable topicality the programme for this year’s San Francisco Silent Film Festival has just been announced, including……..The Primrose Path.  So you can now say “I saw it first, in sunny Lambeth”.  Screenings of Midnight Molly are even more rare.  In fact, I have the suspicion that tonight’s print from the BFI National Archive may well be the only remaining copy in existence, which just served to make the evening even more special. Full marks to Michelle and all the team at KenBio for programming and presenting these rarities.