Pandora’s Box (Dir. G W Pabst, Ger, 1929) (Screening format – DCP, 135mins) Based on two plays by the German author Frank Wedekind, Erdgeist (Earth Spirit, 1895), which Pabst himself had directed for the stage, and Die Büchse der Pandora (Pandora’s Box, 1904), the silent drama follows the tumultuous life of the showgirl Lulu whose unselfconscious sexuality brings about the ruin of all those that fall for her and eventually her own.  In a daring move, 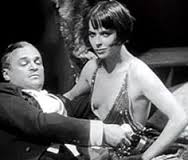 Pabst chose a little known American actress over the more experienced Marlene Dietrich for the part of Lulu, a decision that made the young Louise Brooks an international star. Her innocent looks paired with her natural erotic allure and sense of movement – Brooks was also a dancer – perfectly matched Pabst’s idea of his heroine as unwitting seductress. Subjected to cuts to eliminate some of its “scandalous” content and unfavourably reviewed by critics at the time, it is now considered one of the boldest and most modern films of the Weimar era highlighting Pabst’s command of camera language and montage.  Find out more at silentlondon.co.uk  With recorded soundtrack. Film Theater, Stoke on Trent Link

mins ) In The Lodger, a serial killer known as “The Avenger” is on the loose in London, murdering blonde women. A mysterious man (Ivor Novello)  arrives at the house of Mr. and Mrs. Bunting looking for a room to rent. The Bunting’s daughter (June Tripp)  is a blonde model and is seeing one of the detectives (Malcolm Keen) assigned to the case. The detective becomes jealous of the lodger and begins to suspect he may be the avenger.  Based on a best-selling novel by Marie Belloc Lowndes, first published in 1913, loosely based on the Jack the Ripper murders,  The Lodger was Hitchcock’s first thriller, and his first critical and commercial success. Made shortly after his return from Germany, the film betrays the influence of the German expressionist tradition established in such films as The Cabinet of Dr. Caligari (1919) and Nosferatu (1922). Find out more at silentfilm.org. Presented as part of the Rugby Festival of Culture.   With live musical accompaniment by the Meg Morley Trio. Macready Theatre, Rugby School, Rugby   Link