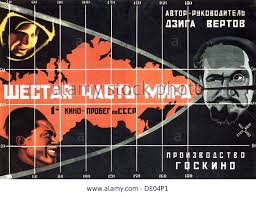 We were at the Barbican this afternoon to see the first of a short season of rarely screened Soviet silent films, being presented as part of a series complementing the exhibition ‘Revolution: Russian Art 1917–1932’ at the Royal Academy of Arts.  Today’s film, A Sixth Part of the World, was directed in 1926 by Soviet pioneer of newsreel and documentary film making, Dziga Vertov.  The title refers to the landmass of the Soviet Union which constituted one sixth of the earth’s total. The film was commissioned by GOSTORG, the Soviet state owned trading agency, responsible for handling all of the country’s imports and exports.  But in Vertov’s film they got perhaps just a little bit more than they anticipated.

A Sixth Part of the World is divided up into a number of broad themes.  The film opens not in the Soviet Union but in the West, with a critique of the capitalist systems in place there. Footage of heavy industry where the workers toil is intercut with film of

the wealthy classes at leisure, dancing, laughing and drinking.  The focus then switches to imperialist colonies around the world, with the workers virtual slaves, controlled by imperial masters.  In an ever more rapidly paced montage all of these images are edited together with shots of a theatre where it is claimed black musicians and dancers are racially exploited for the enjoyment of those same moneyed classes.

We then switch to the Soviet Union itself, and a segment which provides a glimpse of the vast range of ethnic, national and racial groups making up the country’s population, from farmers washing sheep on the Steppes, deserts around Bokhara, the broad streets of Leningrad, reindeer herders in the desolation of the arctic, fishermen in the Caspian, factory workers, all shown at work or at leisure, eating, playing games, even people in a cinema watching this very same film.  The overall message is of a people happy, contented and well fed , all engaged in building the ultimate Socialist state.   There is then a section detailing the extent of natural resources within the Soviet Union, the huge range of wildlife (seabirds, cattle, sheep, pigs, goats, camels, reindeer, the hunting of squirrels, bears and foxes) and the myriad forms of farm and industrial output (factories spinning cloth, heavy machinery, oil derricks, cotton, fish, flax, tobacco), all of which now belongs to the people.

And then comes the main message of the film, that Russian goods such as grain, oranges, furs, caviar and livestock are being sold abroad, to capitalist countries.  The intention being to raise money with which the Soviet Union will buy in goods from those same capitalist countries, in particular industrial equipment.  But rather than just machinery the emphasis would be in buying machines capable of making other machines, in order to eventually make Soviet industry independent of foreign suppliers.   All of this import-export trade is handled by the GOSTORG state trading organisation.

Despite the progress being made in achieving Socialism in the Soviet Union the film pointed out that many old beliefs persisted and there was still much to do.  Women were shown in veils.  Religion, be it Islam, Christianity or Buddism, continued to hold sway in some regions along with shamans and animal sacrifice.  But advances were being made.   More women were being educated, the Socialist message was spreading

and there was improvement in areas such as animal husbandry, irrigation, farming and industry.  This in itself would serve as an example to the rest of the world and serve to encourage the spread the socialist message which would eventually overthrow the capitalist system.

First and foremost, A Sixth Part of the World is an outstanding piece of filmmaking.  Composed of a mix of mainly bespoke film interspersed with some stock footage, it presents a kaleidoscope of visually stunning images, for example, the vast reindeer herds crossing arctic wilderness, the long line of women collecting up newly shorn wool, the men loading sacks of grain on to a ship almost robotically, the view from above the bow of an icebreaker as it cuts through the frozen waters or the camera moving high overhead along a factory floor.  As each theme is addressed the superb editing results in a gradual crescendo of images to firmly drive home the point being made.    And Vertov also takes the opportunity to slot in one or two clever visual

tricks such as the animated self-packing oranges as well as some nicely done multiple images.

But the film is also important as a travelogue and anthropological record of the Soviet Union of the mid-1920s.  The geographic and climatic variation in a country of such size never fails to amaze, as does the extraordinarily diverse range of ethnic groups comprising the population. Vertov excels in focusing in on people, their faces and their expressions.  The young woman, initially nervous of the camera who then breaks out into a genuine smile is a delight, as is the Muslim woman dispensing with her veil or the bemused looks of the women listening to Lenin’s voice on a gramaphone.  Yet while development in the western Soviet Union at this time was quickly moving ahead, striving to catch up with Europe and America, the film underlined that much of the rest of the country remained remarkably backward and under-developed by comparison.  Industry in many areas was almost non-existent, farming beset by primitive methods, poverty was endemic and ancient beliefs and practices persisted.

But this of course was the message Vertov was trying to get over, that through export-financed development the lot of the Soviet people would improve and as such A Sixth Part of the World serves as a powerful piece of propaganda film making.  Right from the first inter-title there is a strong message being sent out here, because the inter-titles don’t so much speak to you as scream out at you, in screen-filling font.  In the opening section on the capitalist west the tone is accusatory “I see you…”, the western imperialist capitalist, “I see you” the exploiter, the racist.  But in the sections

on the Soviet Union it is a more all-encompassing “you”, you herding those sheep, you working in that field, you watching this film,  we are all in this together, this plan to build “the complete socialist society”.  And together the filming and the editing produce an almost irresistible message that it all belongs to us, we all have a share in this success, we are building the future. But were they?

At the time that A Sixth Part of the World was released, in 1926, the New Economic Policy that it championed (in which a degree of free-market capitalism had been re-introduced into the Soviet system in order to finance economic growth through export sales) had been running since 1921 with considerable success.  But Lenin, the NEP’s instigator and champion, died in 1924 and by 1926 Stalin had emerged from the resulting power struggle as the new Soviet leader.  He had always opposed NEP and now pushed for more rapid industrialization and central control of the economy.  Even as A Sixth Part of the World was being released, NEP was dying. In its stead came the Five Year Plan, collectivization of agriculture, extermination of entire peasant farmer classes and mass starvation. Vertov’s message that ‘it all belongs to us, we all have a share in this success, we are building the future’ no longer seemed to matter when a police state held sway and millions died or were jailed in the purges.  As for the Soviet Union acting as an example of Socialism to the rest of the world, Stalin’s adherence to a policy of ‘socialism in one country’ made this another irrelevance.  And yet even if the NEP that Vertov was championing had continued, wasn’t his message one of blatant contradiction.  For here was the indolent, the corrupt, the exploitative, the racist, the capitalist west, yet he was exalting the Soviet people  to export goods to that same West just so the Soviet Union could catch it up!   Just because Soviet workers

were told they had a share in the future, that they were all in it together, did this really mean it was true?  Even under NEP some were already ‘more in it than others’.  In the end, was Vertov’s picture of contented, smiling Soviet citizens just another dose of exploitative propaganda, its own era’s version of ‘alternative truth’.

The reception afforded to A Sixth Part of the World when it was released was mixed.  GOSTORG was unhappy that the film wasn’t just a straightforward newsreel setting out what it did.  They didn’t feel that they should have paid for a piece of political propoganda, particularly one that had gone severely over budget. While some critics praised its cinematography others criticised the supposed twisting of facts. In the face of this criticism Vertov was fired from Sovkino, the central state body for Soviet Cinematography in 1927.  It was only when re-hired by the Ukraine State Studio that he was able to make his most famous film, Man with a Movie Camera (1929).   In 1931 he released Enthusiasm: Symphony of the  Donbass about Ukranian miners and in 1934 Three Songs about Lenin which looked at the 1917 revolution through the eyes of the Russian peasantry but by the mid-1930s, his work had largely fallen out of favour and Vertov became little more than an editor for Soviet newsreels.  He died of cancer in Moscow in 1954.  In looking at the work of Vertov, mention must also be made of his wife, Elizaveta Svilova, and his brother, Boris Kaufman.  They were, respectively, noted film editor and cinematographer and worked alongside Vertov on most of his projects and although Vertov’s name may be to the forefront these films are very much the product of this triumvirate.

Finally praise is due also to John Sweeney on piano for the superb musical accompaniment to this film. This was one of the best piano accompaniments to a silent film I have heard.  The music positively soared with the dramatic visuals yet also perfectly captured the quieter,  more intimate moments and  the overall musical pacing beautifully matched the ebb and flow of Vertov (or Svilova)’s montage editing, building time and again to a crescendo only to then subside and start all over again.

A Sixth Part of the World is available on DVD  from Editions Filmmuseum with a somewhat monotonous, almost robotic soundtrack from Michael Nyman.  It can also be viewed online with the Nyman soundtrack but in a version lacking translation of the inter-titles.