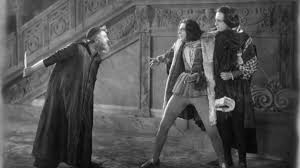 The Merchant of Venice ( Der Kaufmann von Venedig) (Germany, 1923, Dir. Peter Paul Felner) was being shown by the Barbican as part of its Shakespeare on Silent Screen season with live musical accompaniment by Stephen Horne. As the lights went down I thought for just a moment that we were watching the wrong film as the title on the screen was The Jew of Mestri.  The explanation being that a version of the original 1923 German release of Merchant of Venice, reduced in length by approximately two reels, was released in the United States in 1926 under this alternative title.  The print we were watching (from the UK’s National Film Archives and the only surviving copy) was the American release version.  (However, the presence of a Stoll Pictures Logo and BBFC certificate at the start of the film does seem to imply that this version was screened at some point in the UK).

Produced, directed and scripted by Austro-Hungarian born Peter Paul Felner, this film is a fairly fast and loose adaption of Shakespeare’s Merchant of Venice, with some new characters added and others missing.  This US version of the film is also interesting in that the character 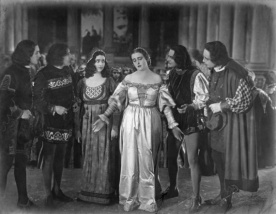 names have all be changed from the original German (and Shakespearean) version.  So, for example, Shylock is now Mordecai and Portia is now Beatrice.

In the film, Mordecai, the Jew of Mestri (Werner Krauss, image above, left)) is a money-lender to many of the Christian noblemen of Venice.  His daughter Rachela (Lia Eibenschutz)  is in love with a Christian noble, Lorenzo (Heinz Rolf Munz), but Mordecai plans an arranged marriage for her with the son of a Jewish friend.  In order to pay a dowry Mordecai’s wife goes to collect debts from the Christian noblemen but they refuse and in the ensuing argument she collapses and dies.  To escape the arranged marriage Rachela runs off with Lorenzo.  Mordecai is distraught and vows revenge for the loss of his wife and daughter.  Meanwhile, impoverished nobleman Giannetto (Harry Liedtke) meets Beatrice, the Lady of Belmonte (Henny Porten) a rich widow and they are immediately attracted to each other.  In order to conceal his penniless state from Beatrice, Giannetto seeks a loan from Mordecai and his wealthy friend Benito (Carl Ebert) agrees to stand bond for the loan, agreeing to offer up a pound of flesh if the loan is not repaid.  When Benito runs into financial difficulties and cannot repay, Mordecai sees his chance for revenge and claims his pound of flesh.  At a hearing to 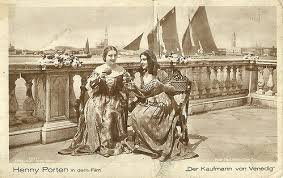 decide the legitimacy of Mordecai’s claim Beatrice, disguised as man, successfully argues against Mordecai and Benito is freed.  Giannetto and Beatrice are married as are Rachela and Lorenzo, while Mordecai is left in desolation.

The Merchant of Venice, even in this un-restored print, looks superb with beautiful cinematography.  It is a perfect exemplar of the scale and ambition of German cinema in the Weimar era.  The film was shot largely on location in Venice.  Much of it was filmed outdoors, making extensive use of the city’s historic sites, canals and waterways.  A number of outdoor scenes were also filmed at night, particularly a spectacular carnival scene, adding to the technical challenge. Many of the larger scale indoor scenes made use of sumptuous and imposing real locations rather than being studio bound which further enhanced the grandeur of the production.  While the cast may not have run to thousands, it certainly numbered many hundreds, all beautifully costumed, and large scale set pieces such as banquets and the court scene were superbly choreographed.

In the role of Mordecai, around which the story centred, Werner Krauss was impressive and convincing.  Having been a minor theatrical actor since 1913, Krauss made his film debut in 1916, achieving fame for his portrayal of the titular character in The Cabinet of Dr Caligari (1920).  Despite Mordechai’s dogged determination to take his grim revenge of a pound of flesh, for much of the film Krauss elicited sympathy as the despised and put-upon Jewish money-lender to whom everyone turned when in need.  I particularly enjoyed a scene in the court room that 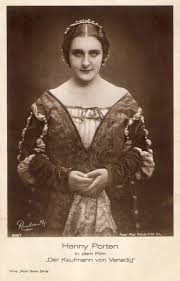 saw him sharpening his knife on the leather sole of his shoe, an action clearly calculated to arouse further ire from the assembled masses.  That his portrayal of Mordechai verged on (and sometimes went well into) stereotype may have been no more than a reflection of the source material.  However, Krauss was virulently anti-semitic and a supporter of Nazi ideology, going as far as staring in anti-Semitic propaganda films.  This pretty much ended his acting career once the Second World War was over.

Also excellent was Henny Porten (image right)  as Beatrice.  She began her cinema career in 1906 with no previous acting experience, eventually making over 170 films.  I felt that she brought a lightness of touch to the part of the wealthy and regal Beatrice but also had a nice sense of comedic timing, for example, in scenes where she mischievously diverts another suitor in order to get closer to Giannetto. Despite refusing to divorce her Jewish husband when the Nazis came to power, both she and her husband survived and she continued to act both during and after the war.   I was less impressed with Harry Liedtke  (image left) as Giannetto.  Despite a strong background in theatre and a close association with Ernst 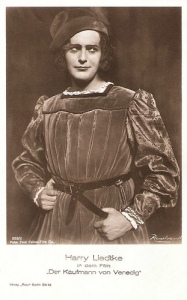 Lubitsch in earlier films, his acting was over-theatrical and did not convince. Whilst he remained a popular actor into the 1920s he did not make the transition to talking films.  Also, playing a minor role as the Doge of Venice was  Max Schreck, the vampire Count Orlok in Nosferatu (1922).  As for director Peter Paul Felner, I can discover little about him other than that he wrote and directed at least 16 films (none of which I have seen) before his death in 1927.

Taken together, the story, the locations, the acting all added up to make the Merchant of Venice an impressive and enjoyable film. It may have been at least one step removed from genuine Shakespeare but it told a good story.  There were some wry comedic moments as well as real tension in the court case.  My only quibble would be with the scenes after this, in which Giannetto discovers that his saviour is in fact Beatrice, disguised as a man. Although this was plotting in keeping with Shakespeare’s original, it was played almost as knock-about comedy, more in line with, say, The Comedy of Errors than The 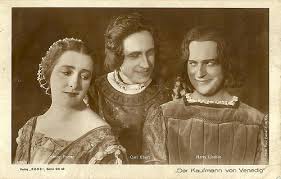 Merchant of Venice. This produced a somewhat unsettling ending, particularly when we went back finally to a desolate Mordechai.  But this was not sufficient to spoil the overall impact of the film which `… holds interest continuously and marks in some respects a forward movement in the development of Shakespearean film. It is often not good Shakespeare, but it is often good film’  (Ball R. H. Shakespeare on Silent Film: A Strange Eventful History 1968)

Finally, mention must go also to Stephen Horne whose performance on piano, piano-accordion and flute was, as always, impeccable.  His accompaniment, underlining the plot and drawing out the emotions, added enormously to ones enjoyment of this film.