NB.  With screening venues beginning to re-open we have started to update our listings but some events remain unconfirmed and others may be cancelled at short notice so be sure to check with the venue before you attend.

Steamboat Bill Jr   (Dir. Buster Keaton/Charles Reisner, US, 1928)   (Screening format – DCP,  71  mins)  In Steamboat Bill Jr a crusty river boat captain hopes that his long departed son’s return will help him compete with a business rival.  Unfortunately, William Canfield Jnr (Buster Keaton) is an effete college boy.  Worse still, he has fallen for the business rival’s daughter (Marion Byron).     Featuring some of Buster’s finest and most dangerous stunts, it’s a health and safety nightmare maybe but it’s entertainment that will live forever.  The final storm sequence is still as breathtaking today as it was on first release. Not a commercial success at the time, this is now rightly regarded as a Keaton classic. Find out more at Wikipedia.  With recorded musical accompaniment.  BFI Southbank. Link 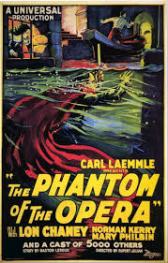 Phantom Of The Opera (Dir. Rupert Julian, 1925)  (Screening format – not known, 103mins)  A title that needs no introduction, The Phantom of the Opera has spawned many remakes, remasters and sequels. This original film version, produced with moments of early Technicolour, sees Lon Chaney, the ‘Man of a Thousand Faces’ perform one of his most iconic roles. His ghastly make-up and outrageous performance made this title a benchmark in the American silent film era. The film was a critical and commercial success upon release, and still stands as an important film in cinematic history to this day, with press quotes from the time labeling the film an ‘ultra-fantastic melodrama’ (New York Times), ‘produced on a stupendous scale’ (Moving Picture World) and ‘probably the greatest inducement to nightmare that has yet been screened’ (Variety).  The mysterious phantom (Lon Chaney) is a vengeful composer living in the catacombs under the Paris Opera House, determined to promote the career of  the singer he loves (Mary Philbin).  Famed for the phantom’s shock unmasking, incredible set designs and the masked ball sequence, it still packs a punch. Find out more at wikipedia.org  Presented by Pitshanger Pictures,  With live organ accompaniment.  St Barnabas Church, Ealing, W13 Link