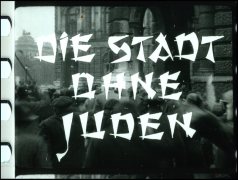 It is hard to imagine another silent film as eerily prescient as The City Without Jews.  Made in 1924, a full decade before the rise of Hitler and Nazism and the subsequent Jewish holocaust, the film prophetically foretells the growth of anti-Semitism, the scapegoating of Jews and their expulsion from the fictional city of Utopia (a thinly disguised Vienna).  But watching the film now, in late 2018, amid the spread of nationalist politics worldwide, the rise once more of anti-Semitism, growing xenophobia and the political paralysis caused by an anti-immigration focused Brexit, it continues to present a salutary warning of the consequences of racial intolerance and religious hatred.

In the film, Utopia is increasingly beset by financial recession, runaway inflation, and mass unemployment.  This in turn leads to unrest and violent protest amongst the population. Utopia’s Jews are scapegoated by the country’s ‘aryan’ population as being the cause of their problems (Image, left). This sentiment is whipped up by the virulently anti-Semitic Chancellor Dr. Schwerdtfeger (Eugen Neufeld),

who calls for all Jews to be expelled from Utopia, ignoring warnings of the possible consequences. When a wealthy US financier offers economic support to Utopia in return for this expulsion, the idea gains support and legislation is passed.  As the expulsion is ruthlessly enforced, families are split up. Amongst those departing is Leo

The departure of the Jews is celebrated with fireworks and rallies and to begin with all seems well. But dwindling foreign finance and a loss of Utopia’s export markets leads to renewed economic difficulties. Despite the Chancellor’s pleas that he is doing his best for the country, popular unrest swells once more.  Meanwhile, Leo Strakosch, now exiled in Paris, decides to return to Utopia in disguise.  After secretly visiting Lotte he seeks to ferment further unrest with a secret leafleting campaign highlighting the economic and cultural damage done by the expulsion of the Jews.  He is also instrumental in the formation of a new political party to overturn the expulsion decision. Pressure on the Chancellor mounts with news from the US financier that he is now marrying the daughter of a Jewish banker and insists that the expulsion law is

overturned.  However, this requires a two thirds majority in the council chamber and the reformists look to be just one vote short.

But Leo has befriended arch anti-Semitic Councillor Bernard (Hans Moser) and after getting him drunk  drives him out of town so he cannot vote in the crucial ballot.   When Bernard sobers up he seeks to contact the council chamber from the nearest phone, which happens to be in a mental asylum.  But he is too late and the expulsion law is overturned. Descending into

a violent rage, Bernard is confined in the asylum.  Lotte and Leo are re-united while Bernard, shut up in in his  cell and struck down by delirium, imagines himself a Zionist (image, right).

The City Without Jews is based upon a best-selling satirical novel of the same name by Jewish-born Austrian writer Hugo Bettauer (image, below left) .  Published in 1922, the novel reflected the already rising tide of Austrian anti-Semitism in the early 1920s. Although the film achieved some  success both in Austria and abroad, it never matched the popularity of Bettauer’s novel (which sold some 250,000 copies). The film also sparked protests and opposition from nationalist groups who sought

to ban it and also disrupted screenings.  Several of the Jewish actors in the film were apparently forced to emigrate but, more significantly, release of the film refocused the attention of Austria’s nascent Nazi party on Bettauer, denouncing him as the “Red poet” and a “corruptor of youth”.  In early 1925 he was shot and killed by Otto Rothstock, a party member who claimed he wanted to save German culture from Jewish degeneration.” Declared insane, Rothstock would serve just 18 months in an asylum before being released.

The City Without Jews disappeared from circulation after the Nazis came to power in 1933 with a final screening reportedly in Amsterdam that year in protest at Hitler’s election.  It would not be seen again for almost 60 years when a version re-discovered in the Netherlands Filmmuseum was restored.  But that version was incomplete, lacking its original ending (in this version the whole story turns out to have been a dream of Councillor Bernard’s) and likely to have been censored for foreign audiences to remove some of the more extreme anti-Semitic content. However, in 2015 another version of the film was discovered in a Paris flea-market. The Austrian Film Archive then launched an ambitious crowd-funding appeal to finance the digital restoration of a complete version of the film utilising content from both surviving copies. 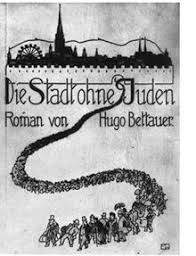 This was particularly ironic given that the film’s original production had apparently been financed back in 1924 by a form of public subscription.  The crowd-funding target of $80,000 was quickly achieved, reportedly due to some considerable assistance of American Jewish groups following the election of Donald Trump as US president.

In watching the film tonight it is clear to see how well this money has been spent.  While a few minor signs of film damage remain, presumably taken from the heavily damaged Amsterdam version, the bulk of the film is beautifully restored. In terms of the film itself, for a picture made in 1924 its a relatively unsophisticated production, with largely static camera work, routine editing and little in the way of movement, close-up or technical innovation.  The acting is somewhat ponderous, with a

number of the players, particularly the cook and the commissionaire, portrayed as caricatures, indeed almost as grotesques (image, right). Although based upon a satirical novel it is also somewhat uncomfortable given what we know now, to reconcile the elements of comedy with the overall story-line of the film.  This is not of course the fault of director Hans Karl Breslauer.  How could he foretell the eventual fate of Europe’s Jews under the Nazis (how could anyone?).

Yet while The City Without Jews may not be a particularly well made film, its true value and significance lies in the message it conveys. Much of the credit for this may lie with the original author

but this should not detract from the power of Breslauer’s interpretation.  Nowhere is this better demonstrated than in the scenes of forced expulsion, as better off Jews with their bags and suitcases are herded onto trains, while the poorest are forcibly

marched into exile carrying all they possess on their backs, led by rabbis holding the Torahs.  A decade later these scenes would be repeated for real as Jews marched towards the concentration camps in their millions.

Its story of the impact of scapegoating of one sector of society by another and the cultural and economic impoverishment likely to arise from their expulsion, repatriation or exclusion remains as disturbingly prophetic and relevant now as when first made in 1924..

Amongst the cast, Johannes Riemann (Leo) began his film career in 1916, becoming a well known star of German and Austrian films in the 1920s.  In the 1930s he went on also to direct several

features.  But his membership of the Nazi party and apparent performance for concentration camp staff at Auschwitz severely impacted his post-war career.  Anny Miletty (Lotte) was married to director H K Breslauer and appeared in a number of his films.  Breslauer himself began directing in 1916.  While The City Without Jews was reportedly his last picture, another of his films was released subsequent to it although this may have been made earlier. While The City Without Jews may have been a warning of the dangers of anti-semitism, it apparently did not stop Breslauer joining the Nazi party.  In contrast, Ida Jenbach who co-wrote the screenplay to The City Without Jews with Breslauer died in Nazi concentration camp in Minsk.

Live accompaniment for the film this evening came from the PHACE Ensemble with the premier of a new score by composer Olga Neuwirth. This was a mix of pre-recorded electronic backing track together with the nine musician ensemble performing live on stage. The score was a dissonant reworking of apparently well known themes.  Certainly Land of Hope and Glory was identifiable at one point. But while the score may have been intended to generate a sense of unease, distress or perhaps even  rage over the film’s storyline, I found instead that it ultimately became something an annoying distraction which ill-matched the events on screen and undermined any emotional resonance with the unfolding visuals.

The City Without Jews is not currently available on disc although it is to be hoped that this restored version will be issued by Film Archive Austria (FAA) in the near future.  There is a good quality version available to view on You Tube (although only with German and Spanish inter-titles) accompanied by a more sympathetic score.