Where does one begin, in attempting to put in to words one of the most stunning evenings of silent film and live musical accompaniment that it has ever been my pleasure to see. We were at the Barbican concert hall tonight, in a capacity audience of almost 2,000, for the BFI London

Film Festival’s Archive Gala, to see the screening of a newly restored version of the film Shiraz: A Romance of India (Dir. Franz Osten, Ger/Ind/UK, 1928).   This is an epic spectacle of love and loss in 17th century India with a (somewhat fictionalised) account of the life of the Princess who inspired the construction of the Taj Mahal.  Accompanying the film was the world premier of a newly commissioned score for the film, composed by renowned sitarist and composer Anoushka Shankar and performed live by Anoushka and her ensemble.

The film opens with an attack by bandits on a wealthy trade caravan.  Almost the only survivor is Selima, an infant princess, orphaned and left wandering in the desert with just a pendant around her neck. Found by an impoverished potter, he takes the child home where she is raised in his family alongside his own small son, Shiraz. Years pass and the children, now fully grown, have come to adore one another. Selima (Enakshi Rama Rau) is kidnapped by slave traders and in the struggle looses her pendant.  Picking up the pendant, Shiraz (Himansu Rai) follows their trail but is unable to stop Selima being sold at the slave market to Kasim (Profulla Kumar), the chief steward to Prince Khurram (Charu Roy).

At his palace, Prince Khurram is attracted by Selima’s beauty and independent spirit and the two gradually fall in love although they are forbidden from marrying as Selima, being a slave,  is not considered to be of royal blood. But the closeness of Selima and the Prince provokes anger from Kasim’s daughter Dalia (Seeta Devi) 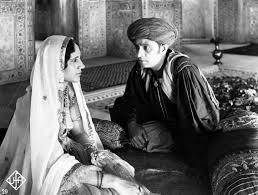 who has secret ambitions to marry the prince herself and eventually become Empress.

Meanwhile, Shiraz has tracked down Selima to the Prince’s palace but is unable to gain entry. Dalia, made aware of Shiraz’s desire to meet with Selima, plots via her servant Kulsam (Maya Devi) to effect Shiraz’s entry with a pass she has forged using the Prince’s seal (image left).  But she then also arranges for the Prince to catch Shiraz and Selima together.  Selima is thrown in jail.  When Shiraz refuses to reveal Kulsam’s involvement in his entry to the palace the Prince orders his execution, crushed by the foot of an elephant.

Kulsam, overwhelmed by guilt over Shirax’s impending death and his refusal to implicate her, implores Dalia to prevent his execution.  Instead, Dalia poisons Kulsam but, with her dying breath Kulsam reveals the truth to Prince Khurram. When Shiraz’s pass is recovered and reveals Dalia’s guilt she is banished, Selima is freed and Shiraz’s execution is halted in the nick of time.  The Prince asks Selima if

she loves Shiraz.  When she replies yes, but only as a brother, Shiraz dejectedly plans to leave but first returns Selina’s pendant.  Recognising this as a sign of royal lineage, the Prince is overjoyed as it means he can now marry Selina (image right). When the Prince succeeds to the throne as Emperor Shahjahan, Selina is given the title Mumtaz Mahal.  Shiraz maintains a ceaseless vigil outside the palace gates until, almost blind, eighteen years later he hears that Selina has died.

The Emperor decides to build a monument to her memory such as the world has never seen. Shiraz’s design is selected for the memorial at which point the Emperor orders him blinded so that he can never design something more beautiful.  But when it is discovered that he is already blind the Emperor and Shiraz together oversee the building of the Taj Mahal, a monument to the woman they both loved.

Everything about tonight’s screening was a superlative.  The film itself was superb, the restoration looked stunning and the music was out of this world.  Together, they worked so well that its difficult to find words to sum up the whole experience. Sensational, magnificent, even electrifying, hardly seem to do justice to the evening.

Beginning with the film itself, this was a beautifully composed and  structured story. Tautly and economically shot, there wasn’t a wasted scene during its 105 minute running time or a moment when it seemed to drag. Although much of the film was

shot at a quite intimate level between the main characters, the more grandiose scenes of pomp and ceremony were magnificent to look at and the opening scenes of the attack on the caravan were thrillingly staged. Filmed on location in the city of Agra, including at the Taj Mahal itself, this was a film of great beauty, wonderfully lit and sumptuously costumed. It is also a film which dealt candidly with the realities of life at both ends of the social spectrum in 17th century India with, at one extreme, the tenuousness of freedom for the poor in a land rife with kidnap and slavery while at the other, the absolute power over life and death wielded by the elite.

Shiraz was the second of three silent films made by the team of producer Himansu Rai, writer Niranjan Pal and director Franz Osten.  Rai was studying law in London in the early 1920s, when he met playwright and Indian nationalist Pal.  After appearing in one of Pal’s plays Rai travelled to Germany to recruit director Franz Osten for a project to make a silent film adaption of the Edwin Arnold poem The Light of Asia (Prem Sanyas), which was released in 1925.  Following the success of that film the same team went on to make Shiraz in 1928 and finally A Throw of Dice (Prapancha Pash) in 1929.  All three films were shot in India with an Indian cast and largely German crew and with an emphasis on location shooting and natural lighting.  They were also interesting in that they tackled stories from three distinct religions, Shiraz with its focus on Islam, A Throw of Dice which was a tale from

the Hindu Mahābhārata while The Light of Asia was the story of the enlightenment of the Buddha.

As well as producer, Himansu Rai (image, left) was also the titular star of Shiraz and excellent as the somewhat simple labourer.  While his relief at the lifting of the elephant’s foot from over his head was palpable, his sense of confusion and then dejection

when he realises that his beloved Selima loves another was almost heart-rending. Rai continued to work as actor and producer into the 1930s, founding in conjunction with Pal and Osten the hugely successful Bombay Talkies Studios, although the 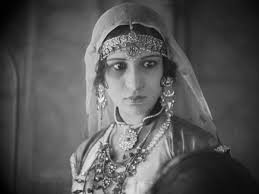 strain of running the studio would result in his early death in 1940.

Although Enakshi Rama Rau was a competent Selima it was somehow difficult to see how the Prince could be so utterly captivated by her.  In contrast, the real star of the film, with a beautifully measured performance, was Seeta Devi (image, left).  She was absolutely bewitching as the cruel and scheming Dalia, jealous of the Prince’s affection for another and determined to win him back at any cost. Born Renee Smith to Anglo-Indian parents in 1912, Devi got her acting debut aged just 13 as the star of The Light of Asia and was still only 16 when she made Shiraz. Sadly she never made the transition to Indian talkies,

perhaps because of her apparent inability to speak Hindi or Bengali. Intriguingly, several sources speculate that Devi may have shared the lead role in these films with her sister, based on her apparent changing appearance between films (image, right, from Light of Asia (1925) and Throw of Dice (1929)), but given the passage of time, this is one mystery unlikely to be resolved.

As for director Franz Osten (image, left), he continued to direct in India, going on to make some

16 Hindi language talkies without apparently understanding a word of the language.  As a German in India he was interned by the British at the start of the Second World War but his age (62) and fragile health meant he was soon repatriated to Germany. Although he subsequently did some film related work there he never 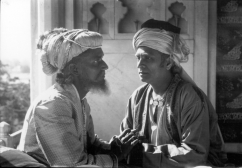 directed another picture and died in 1956.

As for the restoration  itself, this was superb and made the film look as if it could have been shot yesterday rather than 90 years ago.  In his introduction to the film, Robin Baker, the Head Curator at the BFI’s National Archive provided some ‘before and after’ clips of the film to demonstrate just how much had been achieved to reduce shake and flicker and repair damage done to the original negative and print. In doing so he speculated that the restoration work had probably taken longer than the making of the original film.  But it was certainly worth it.

Finally, the live musical accompaniment to the film and its amazing to think that this

was composer Anoushka Shankar’s first attempt at scoring a film.  Performing herself on sitar, Anoushka was accompanied by two traditional Indian percussionists and a flautist together with clarinet, cello, piano and violin plus synthesiser. The music was also powerfully amplified which on occasion can run the risk of overwhelming the film but this was certainly not the case here.  While the sitar could exquisitely pick out the detail of the more intimate moments, there was a power and force behind the grander scenes so that when, for example, those elephants left the palace you not only heard their marching theme, you felt it too. The mix of traditional Indian, Western and electronic instruments allowed the broadest range of tone and sound to be achieved without loosing that Indian motif that perfectly matched the subject matter of the film.  In the programme notes Anoushka spoke of music bringing a film to life, adding that third dimension and helping the audience to

connect with the film.  Well, she certainly achieved that tonight.

It was a fitting tribute to the film, the restoration team and the composer and musicians that at the film’s finale virtually the entire audience leapt to their feet with long and deep felt applause. I can but envy those audiences in India where the film together with Anoushka Shankar’s live score are to be performed once again in November.  They don’t know what a treat they are in for.

Having funded the restoration and new score for Shiraz it is to be hoped that the BFI decide sooner rather than later to release the film on disc.  I don’t think there would be many in the audience at the Barbican tonight who wouldn’t relish the chance in some way to relive the experience.

For some further information see;