Lock-down may be preventing us from getting out to see silent film events ‘in the flesh’.  But don’t forget that there are still opportunities to see films at live On-Line screenings.  Forthcoming events include; 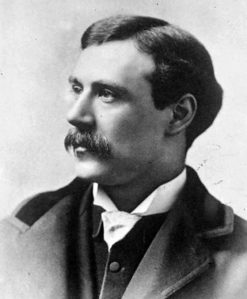 The Real Friese-Greene  Peter Domankiewicz recovers the reputation of the ‘Inventor of Kinematography’    Everything about William Friese-Greene is a problem, beginning with the well-known monument in Highgate Cemetery that marks his resting place, declaring him to be “The Inventor of Kinematography”.   His glorification led to a backlash in the 1950s and 60s, that declared him a fraud and a fantasist, from which his reputation never recovered. Over the last 25 years, Peter Domankiewicz – a film director, writer, and film historian – has been trying to uncover the real Friese-Greene underneath the many layers of myth painted on by those who wanted to depict him as a hero or a scoundrel.  In this talk, in the year of the centenary of Friese-Greene’s death, he will be lifting off the weight of that monument to find the man beneath.   19.00 – 20-30 UK Time. Link

The Silent Comedy Watch Party, screened live from New York and hosted by accompanist Ben Model and silent film historian Steve Massa.  The usual format is three silent comedies introduced by Steve and with Ben doing live piano accompaniment from his Upper West Side apartment.  Tonight’s event is a re-broadcast of one of their earlier shows.  The event streams at 3.00pm EDT (8.00pm UK time) on You Tube. Further details here.       (NB  This event will be available to watch live but will also remain available on You Tube to watch later.) 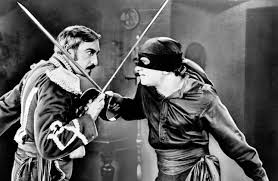 Retroformat Silent Films from Los Angeles present The Mark Of Zorro (Dir. Fred Niblo, US, 1920) ( 85mins)  Don Diego Vega (Douglas Fairbanks) masquerades as an ineffectual fop to bamboozle his enemies and conceal his secret persona: ‘Zorro’: avenger of the oppressed. The first King of Hollywood – dashing, athletic Fairbanks, pretty much defined the swashbuckling genre with this rip-roaring adventure flick. Featuring horseback stunts, witty chase sequences and sword fighting, this entertaining romp achieves a satisfying blend of humour and heroics that remains the benchmark for action films today.  Find out more at  silentfilm.org  Film screens at 7.30 pm US PDT time  with a brand new score by Cliff Retallick. Link     (NB  This event will be available to watch live but will also remain available on You Tube to watch later)

Le Giornate del Cinema Muto in Pordenone present An Old Fashioned Boy (Dir. Jerome Storm, US, 1920) David Warrington (Charles Ray) is an old-fashioned boy, not very familiar with modern girls. When the girl of his dreams lets her kiss him, he thinks that seals their betrothal. But when he finds out that she has other ideas, David tries a trickier method of winning her for his bride.  Find out more at  wikipedia.org  Film screens at 21.00 CEST (20.00 UK Time) ,        With musical accompaniment by Philip Carli. Link

Le Giornate del Cinema Muto in Pordenone present Short Films From The Cineteca Del Friuli.  A selection of short films including Le Bolle Di Sapone/Soap Bubbles( Dir. Giovanni Vitrotti, It, 1911) the story of a young tearaway who teases an old lady, rejects the authority of a policeman and mocks his own mother but who is reformed by the strange characteristics of some soap bubbles;   Cenerentola/A Modern Cinderella (Dir. Eleuterio Rodolfi, It, 1913) an Italian

variation of the Cinderella story but focused upon the audition of an ingenue actress for the title role in a movie of that title;  Polidor Cambia Sesso/Polidor Changes Sex (Dir. Ferdinand Guillaume, It, 1918) in which to receive an inheritance, a man 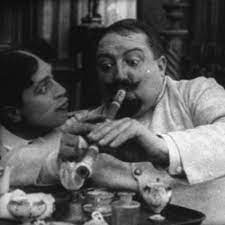 asks Polidor to disguise himself as a young girl and to pass himself off as his fiancée.;  Bigorno Fume L’Opium/Bigorno Smokes Opium (Dir.  Roméo Bosetti, Fr, 1914)  in which Bigorno is by the seashore with his wife and mother in law when a friend returns from a trip to the Orient with gifts — including a hookah and supply of Opium, which Bigorno tries with disastrous results;  La Mosca e il Ragno/The Spider and the Fly (Dir.  Emilio Vardannes, It, 1913) and Il Giglio Nero/Sign of the Black Lily (Dir. Unknown, It, 1913), a crime drama as we follow the hunt for whoever leads the deadly Black Lily Gang..  Screening commences at 17.00 CEST (16.00 UK time).  With musical accompaniment from  Maud Nelissen    Link

Le Giornate del Cinema Muto in Pordenone present The Man From Kangaroo (Dir. Wilfred Lucas, Au, 1920) Former athlete John Harland (Snowy Baker) is a parson on probation.  After loosing his job for teaching young boys how to box he ends up in the town of  Kalmaroo,

where he comes up against a gang led by Jack Braggan (Wilfred Lucas) and things come to a head when the gang kidnaps Harland’s girlfriend Muriel.  The Man from Kangaroo was the first of three features produced by Carroll-Baker Australian Productions, a partnership of the theatre and film showmen EJ and Dan Carroll, the Australian sportsman and film star Reg L ‘Snowy’ Baker and the Southern Cross Feature Film Co. Ltd. The initiative was spearheaded by Baker, who visited Hollywood in 1918, where he perfected his cinematic skills to ensure that his subsequent films would have international standards and appeal. Find out more at aso.gov.au   Film screens at 21.00 CEST (20.00 UK time) With musical accompaniment by Mauro Colombis.   Link

We’re now up to Episode 69 of the Silent Comedy Watch Party, screened live from New York and hosted by accompanist Ben Model and silent film historian Steve Massa.  The usual format is three silent comedies introduced by Steve and with Ben doing live piano accompaniment from his Upper West Side apartment.  Tonight’s films are yet to be announced  The event streams at 3.00pm EDT (8.00pm UK time) on You Tube. Further details here.       (NB  This event will be available to watch live but will also remain available on You Tube to watch later.) 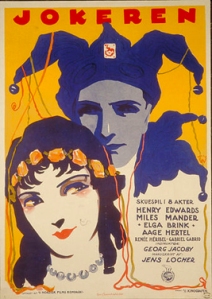 Mander) from profiting from his ill-gotten knowledge.  And who is the young Englishman Mr Carstairs (Henry Edwards), known to his friends as ‘The Joker’, with a passion for gambling.  Is he acting in cahoots with Borwick or against him?  This Danish/German co-production, with some big British names in the cast, is based on the novel “The Joker” by Noel Scott.  Find out more at de-m-wikipedia-org.  Film screens at 21.00 CEST (20.00 UK time).  With musical accompaniment by Stephen Horne.   Link

Le Giornate del Cinema Muto in Pordenone present Fool’s Paradise/Paradiso folle (Dir. Cecil B. DeMille, US, 1921)  After returning from World War I, Arthur Phelps (Conrad Nagel) meets Poll Patchouli, a cantina girl (Dorothy Dalton), in a Mexican border town. She falls in love with him and it pains her to see that he has become

infatuated with another dancer, Rosa Duchene (Mildred Harris). After Phelps is blinded (by an exploding cigar!!) he thinks he is marrying Rosa.  However, he is in for a big surprise.  But this is just the start of his adventures. Based on a Leonard Merrick story ‘The Laurels and the Lady’, director DeMille pulls out all the cinematic stops, from Texas to Siam, in this somewhat improbable romantic drama.   Find out more at cecilbdemille.com.     Film screens at 21.00 CEST (20.00 UK time).  With musical accompaniment by Neil Brand.   Link

Le Giornate del Cinema Muto in Pordenone present A Public Prosecutor and a Teacher/Geomsa-wa yeoseonsaeng (Dir. Dae-Ryong Yoon, Kr, 1948)  A poor orphan is protected by a female teacher at the school he attends.  Years later, the teacher is sent to the prosecutor’s office on the charge of

mistakenly killing her husband during their fight, which started when her husband wrongly thought she had hidden an escapee from prison. The prosecutor turns out to be the same young student  whom she used to take care of. He sets out to prove the teacher’s innocence in order to repay her for her previous kindness.  This incredibly late era silent film is often mistakenly referred to as the only surviving Korean silent.  But the earlier  Crossroads of Youth (1934) has also survived.   Find out more at biff.kr/eng.  Film screens at 21.00 CEST (20.00 UK time).     Link 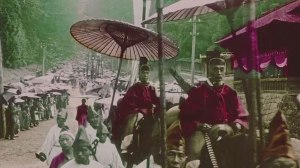 The 2021 London Film Festival presents  Around Japan With a Movie Camera Intense interest in Japan by the West made it a favourite destination for filmmakers from the earliest days of film. This selection of films from 1901 to 1913, newly restored by the BFI National Archive, takes us on a fascinating journey through Meiji Japan.  All films in the programme have been restored and remastered by the BFI National Archive from original elements held within the collection. The programme will be introduced by Mika Tomita, Bryony Dixon and Michelle Facey and the musical accompaniment will be provided by Cyrus Gabrysch, Costas Fotopolous, Stephen Horne and Lillian Henley.  Available to watch on the BFI Player. Link 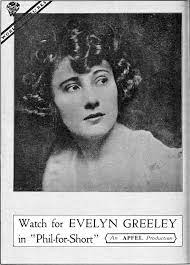 a cross-dressing rom-com in which Evelyn Greenly plays Damophila Illington — Phil, for short. Her father (Charles Walcott) is an absent-minded Greek professor, and Phil lives up to her name by dressing up as a boy. When the father dies, Phil is to be put in the care of Donald MacWrath (Jack Drumier), an old fossil who wants to marry her. To avoid this fate, Phil dresses in her boy’s clothes and hits the road with Pat Mehan (James Furey), a fiddler chum. Along the way she meets John Alden (Hugh Thompson), a Greek teacher at a local college and a staunch misogynist. Then its not just a question of who gets the girl but who will even notice she’s a girl! Find out more at  imdb.com  Film screens at 21.00 CEST (20.00 UK time).  With musical accompaniment by José Marìa Serralde Ruiz   Link

feels sorry for him. When her father gives his daughter two chrysanthemum plants, she gives one of them to Hako.  Will this be the means by which he escapes his life of drudgery?  Ito, the Beggar Boy (Dir. unknown, US, 1910)  When destitute little Ito is orphaned, Lady Wistaria and her husband, Lord Idzu, who are without children, adopt him and he moves into their luxurious world,  When the couple have a child of their own, Ito promises to devote his life to little “Clover Blossom”.  But will tragedy overtake the two children?  Love of Chrysanthemum (Dir. unknown, US, 1910)  Chrysanthemum (Norma Talmadge in only her second film role) is a young Japanese girl,  betrothed and married to a rich, older man.   When a visiting young American sees her and determinedly makes her acquaintance, she is soon smitten with him.   But the American also has eyes for another and tragedy surely awaits.  Films screens at 21.00 CEST (20.00 UK time).  With musical accompaniment by John Sweeney   Link

All’Inferno/Maciste In Hell (Dir. Guido Brignone, It, 1925)  Pluto, king of Hell, sends his

devils to earth to procure souls and capture in particular Maciste, the most virtuous man on earth.  However, Maciste is not tempted by offers of gold, pleasure or power.  But when he is tricked into starting a fight with one of the devils he is consigned to hell.  Once there, will he resist the temptations of Pluto’s wife and daughter and will he every find a way to return to 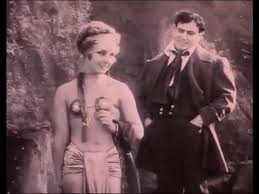 earth.  The character of Maciste,  a slave of herculean strength and great virtue, was created by director Giovanni Pastrone in his 1914 film Cabiria.    While Maciste had only a secondary role in that film, the character proved very popular and, played by Bartolomeo Pagano,  he became one of the favourite characters of Italian silent cinema, appearing in more than 20 films between 1914 and 1926. Find out more at silentfilm.org  Films screens at 21.00 CEST (20.00 UK time).  With musical accompaniment by Zerorchestra   Link